Ostendo Technologies, a US-based startup, has designed a chip that has the ability to project 3D holograms. It is a small chip for Smartphone that can project holograms in thin air. As this chip is under manufacturing, the company plans to launch it in a year’s time.

The new chip from Ostendo is supposed to be as small as a Smartphone camera. This chip will be a good fit inside a Smartphone, without disturbing its contours. According to the company, it has a patchwork of miniaturized LEDs (light-emitting diodes) in layers. Connected to this wafer is an image processor. In contrast to its size, this chip can project much complex and larger images. Ostendo is currently working on the chip that will be able to project 2D videos. Within a short time of its launch, it will also come up with the 3D version capable of holographic projection.

Ostendo’s holographic projector is based on the Quantum Photonic Imaging technology. It can easily project images on a surface that has a 48-inch diagonal. It is expected to perform superbly in case of projecting 3D images and videos with amazing clarity.

The chip system has a pixel density of about 5,000ppi. Thus, its resolution is thought to be its greatest capability. Even the best of Smartphones have not been offering any matching screen display. When it comes to controlling the brightness, color and angle of individual light beams, this chip can handle these controls for more than a million such beams. The quality is undoubtedly overwhelming. 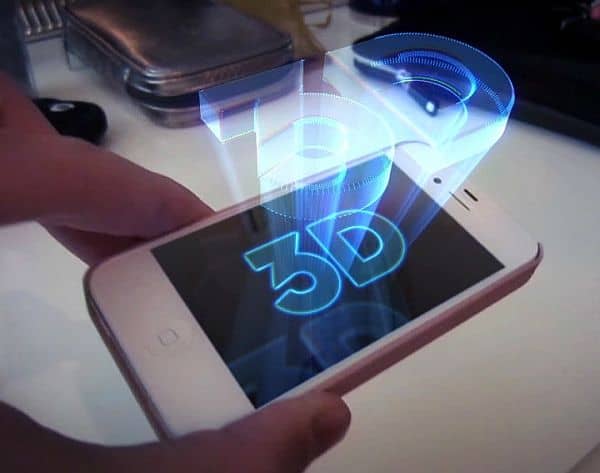 Although the company is planning to out its hologram projector chip in almost every smart gadget with a screen, its usefulness is still a question mark. At a time when several wireless display options are available, many people may not find this chip of much use to them. On the other hand, its quality and performance may make it more appealing to people. They may also find it handy to use after inserting it in the Smartphone.

Currently, the company is estimating to launch its hologram projector chip at a price close to $30. If these estimates become a reality, this chip could definitely turn into a value-for-money product. At least, a few Smartphone brands would like to fit them in their gadgets.