Eat less salt and live longer. You might have read this line in many health magazines and is even mostly recommended by the doctors so as to maintain a healthy lifestyle. Salt is always considered as one of the major ingredients in almost every delicious food that exists across the world. The salt compound basically fulfills the mineral (sodium and chlorine) required by the body. Specifically, it should be nearly about 5 g on daily basis as reported by the World Health Organization. Generally almost all delicious food items are salty ultimately resulting into a higher percentage of sodium element which is unfavorable for people with high blood pressure, diabetic or chronic kidney disease.

So to change the detrimental effects of present lifestyle here is the list of the most demanded 10 salty food items along with its healthy alternatives: 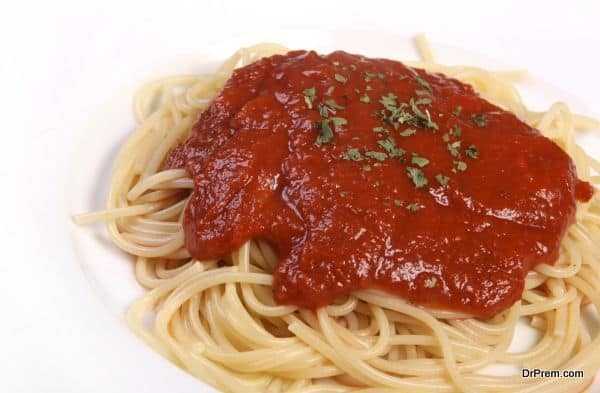 This particular sauce has become very popular in enhancing the extra delicious taste of food items such as pizza crust, lasagna and noodles etc. It is one of the easiest way of making your food luscious in taste. It is either jarred, canned or bottled and is easily available in the market. But the biggest harm associated with it is its high sodium content that eventually can rise up to1000 milligrams of sodium content in your body.

Healthy alternative – You can also prepare home made sauce with all essential and healthy constituents such as onions, garlic, basil, oregano, vine ripened tomatoes and little oil to taste. While adding salt to it, try to mix only a little amount as far as possible. In the end you can heat the whole mixed contents at low flame of the gas for around 10 minutes. This prepared pasta sauce will definitely cut down the amount of sodium with around 160 milligrams per serving .

Pretzels are the favorite choice of fitness conscious people due to its wheat and less fat contents. But at the same time pretzel is one of the major source of salt. It contributes around 390 milligrams of sodium to your food. To avoid the salt consumption through pretzels, try to follow the following healthy alternative.

Healthy alternative– Pretzels basically bear some salt crystals on its surface. So try to rub the overall surface of the pretzel before eating. Secondly, try to choose those pretzels which are mainly composed of wheat as the first ingredient and with less content of other fibers. 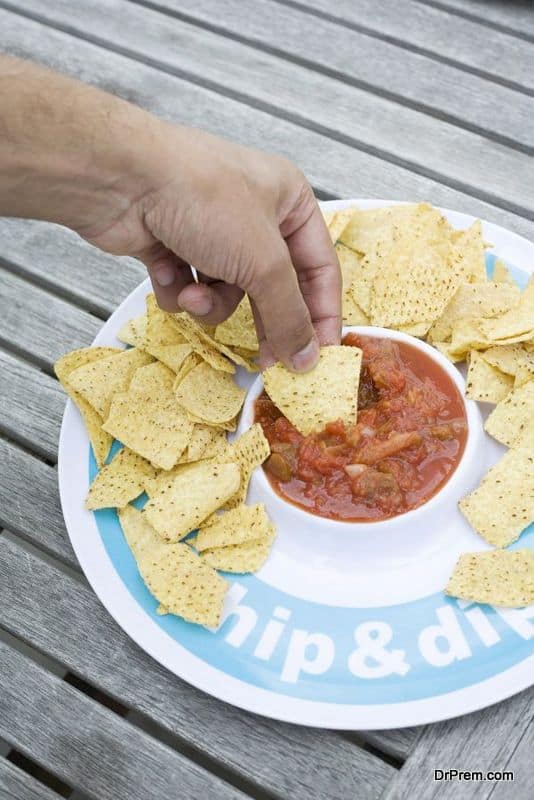 Wafers have always been the favorite snack of all aged people. Tortilla chips are popular in combination with nachos and some side dips, sandwiches and even with taco salads. Tortilla chips are sprinkled with generous amount of salt which is estimated around 250 milligrams of sodium mineral per small amount serving.

Healthy alternative – Preparing over baked tortilla chips at home is one of the best way to control your salt intake. Roll up your tortillas with canola oil and cut them down into wedges form. Keep them into the oven at 375 degree temperature. At the end, spread a little common salt on the processed tortilla wedges. Bake them till they become crispy. After 15 minutes, take out the crispy tortilla chips from the oven.

Teens and youngsters are crazy after noodles. Because of the less time consumption during preparation, noodles are always successful in tempting the taste buds. However, most of the noodle brands manufacture them with higher percentage of sodium which is around 750-950 milligrams. 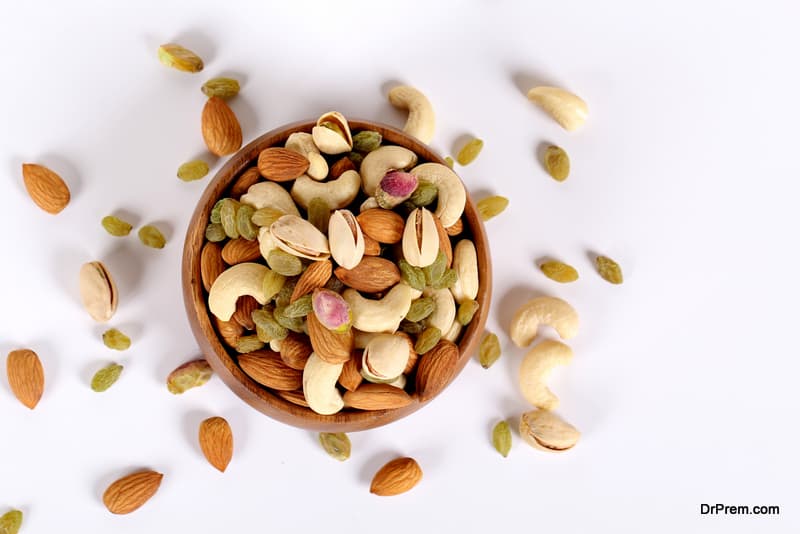 Naturally , nuts are considered as a complete package of healthy nutrients such as protein, fiber, essential fats and various other important nutrients. The fresh nuts usually comprises of zero amount of sodium. However, all packaged nuts in the market are available in salty and various spicy flavors which in turn harm your body. In this way, at least 110 milligrams of sodium per ounce reaches your body fluid.

Healthy alternative – You can prepare your own home made snacks including all nuts like walnuts, almonds etc without salt. Otherwise, while purchasing nuts packets from the market do check the availability of salt content via ingredient information. Many non-salted and less salted nuts are now available in the shops.

One of the most demanded food types in current lifestyle. Just one dish from its menu can add around thousands of milligrams of sodium. Any fast food dish (vegetarian or non-vegetarian) comprises of ample amount of spices and salt content. For example – a spicy chicken does have an efficiency to add around 2100 milligrams of sodium which is really harmful.

Healthy alternative– You can prepare the spicy chicken at home itself. This can reduce the chances of addition of excessive spices and most importantly the salt content. And can pursue a healthy way of enjoyment. 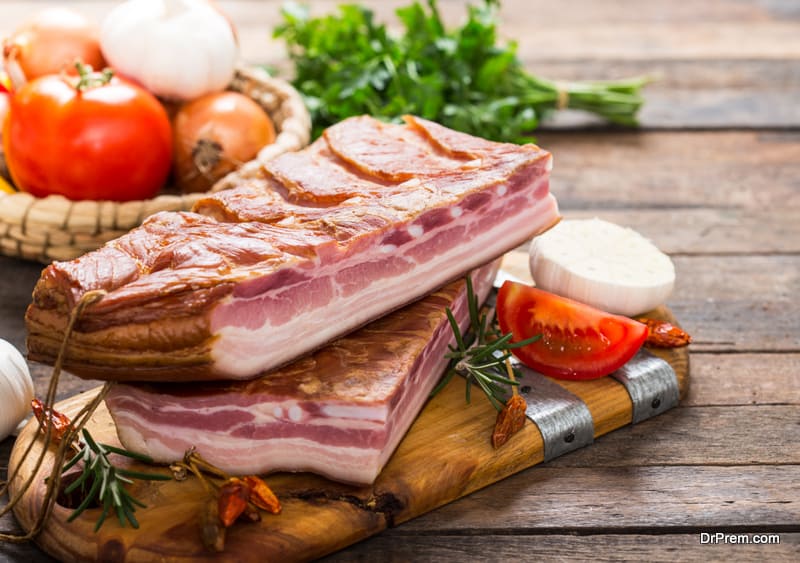 Sandwiches are very common part of the food culture today, especially in America. The packaged meats are generously used for filling the sandwiches. All these processed meats contain very high percentage of salt, due to two major reasons; firstly for the basic use for preservation and secondly for shelf life. This kind of meats adds around 560 milligrams of sodium per two ounce serving.

Healthy alternative– Try to use the fresh meats or roasted meats for filling your sandwiches instead of preserved packaged meats. For example – a roasted turkey without skin serves about 40 milligrams of sodium which is minimal as compared to processed meat types. Hence, freshly cooked meat is more beneficial and healthy.

One additional merit with bottled salad dressing is that it adds on the taste to your dish. However, these are considered to be the rich source of sodium content depending upon the brand and flavors. It is about 120-400 milligrams of sodium content per serving of 2 tablespoons.

Healthy alternative – You can go for such flavor of salad dressing which contains lesser amount of sodium. Such as Lite raspberry walnut vinaigrette is one of the types that consist of lowest amount of sodium. Apart from it, the creamy substance used as a dressing can be diluted by simply adding some fat free or low fat milk so as to reduce the percentage of sodium content. The best way is to prepare the complete salad dressing from the scratch and accordingly the sodium amount can be regulated. 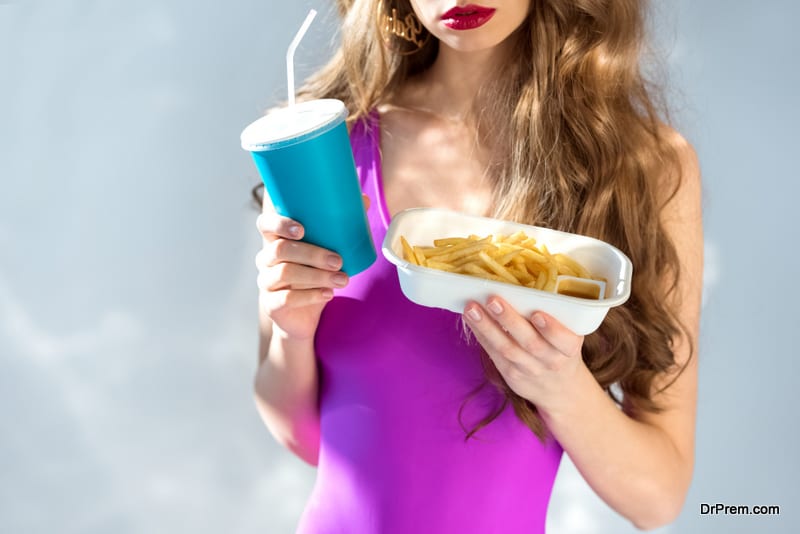 French fries are always irresistible by most of the people. These potato wedges are perfect blend of fat and salt content. They naturally contain 17 milligrams of sodium per medium sized baked potato. Further more content of sodium adds on due to addition of extra salt on French fries.

Healthy alternative – The best way to get rid of excessive salt consumption is to prepare French fries at home itself. Firstly, cut the potatoes into wedges form and coat them with canola oil. Then keep them for baking process in the oven for about 30 minutes. And to avoid less intake of sodium, sprinkle little amount of salt on French fries.

One single burger or sandwich can easily exceed the requirement of sodium in daily basis. It can add even more than 1500 milligra
ms of sodium to your body.

Healthy alternative– The most apt way is to make sandwiches and burger by yourself. As a result of it, you can add all sodium deficient ingredients such as onions or peppers which are very efficient in enhancing the taste of any food. Apart from it, skinless boneless chicken with salt less seasoning can very much save you from excessive sodium intake. Sauces with different flavors can also be used after considering less sodium content into them.

Therefore, all mentioned salty foods can be relished just by following few healthy alternatives. So enjoy each bite without any tension. 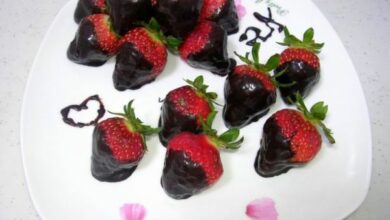 Does anyone have baked chicken breast recipe?

Calories in cherries is too high?

Can I know more about Chipotle nutrition facts?