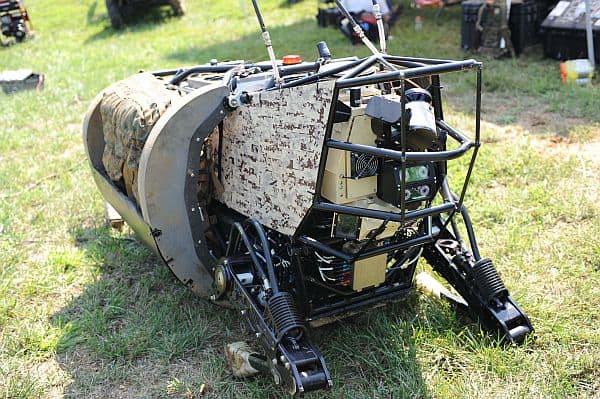 The robots have been developed as part of an effort undertaken by DARPA. Google’s Boston Dynamics took five years to develop the concept of LS3. The LS3 robot functions like a packhorse for the soldiers. The machinery has the capability to carry 400 pounds of equipment or other objects. It has been designed like a giant dog, having movement in the form of quadruple limb motions.

The LS3 has the ability to adapt in hot, cold, wet, and dirty environment conditions. The can sense and negotiate the terrain and when required it can operate in a silent mode, where it does not make any noise. It consists of a stereo vision system that works with a pair of stereo cameras installed in the head section of the robot. LS3 has also been integrated with light detecting and ranging component that enables the robot to follow the lead of the human. The robot makes use of cameras to record the available information, and react according to this external stimulus. However, it is still being developed with the hopes that it can have more space, and an ability to carry heavy weapons and equipment.

GUSS, known as Ground Unmanned Support system tested by MCWL, has been designed to access with conventional vehicles in order to reduce the load carried by the soldier. It is outfitted with autonomous system, which enable it to be operated either through remote control, or by waypoints that allows the vehicle to traverse the terrain on its own, while crossing all obstacles and reaching successfully to the destination. 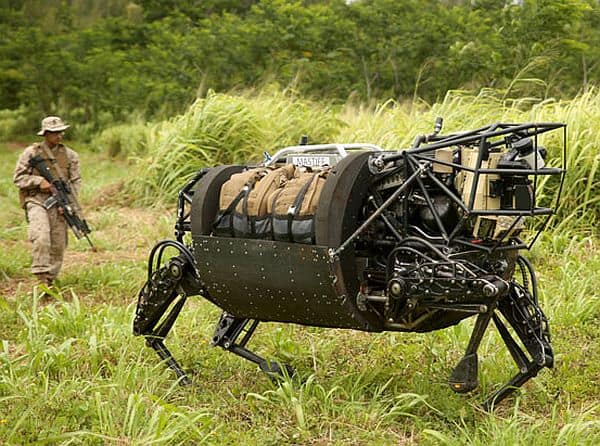 Even if the robot is reloaded with the water, food and resupply gear, the soldiers do not have to drive the vehicle or have to walk along the vehicle to conduct its way. The robot is equipped with an autonomous kit that developed by TORC, and is controlled through the Tactical Robotic Controller. It consists of a safe system stop that allows emergency stop for operators to pause or disable the vehicle when it enters a dangerous zone or detects any fear. It can be controlled remotely from safe location making the driver, or soldier secure from war conditions.

One of the best features of this robot is its pinpoint accuracy, allowing it to move beyond the GPS system limitation and track the position of the vehicle accurately. Pinpoint helps the robot to extend its navigational approach giving it the capability to measure position, velocity, orientation and multiple metrics of the vehicle. 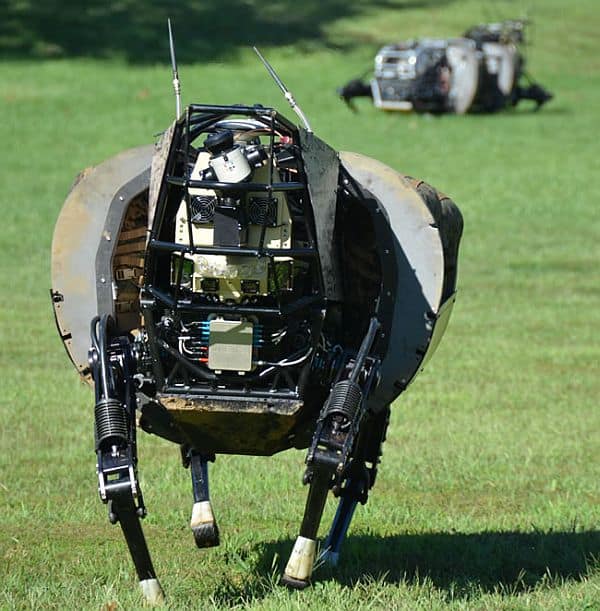 Regardless of the areas where GPS systems fail, the pinpoint feature of the vehicle will not stop updating. GUSS is integrated with Way Sight, which is multifunctional operator handled control unit. The way sight can be operated at various modes, one of them being the target mode that offers flexibility for rapid path planning. The “follow me” mode is an option in which the vehicle moves at a predetermined distance. The “we” mode provides the vehicle teleoperation. According to the situation, several modes can be selected. After the completion of its mission, the vehicle automatically returns to the base without the need of a driver or directions.

Testing of the two robots in Hawaii proved various strong points of technology and highlighted the areas where technology can be improved further. Not only this, this experiment determined what kind of future our technologies have and how it can be pursued.

The two robots LS3 and GUSS have been designed to be a helping hand for the soldiers to carry out missions in different terrain. The idea is to have machines deliver supplies and reinforcements, while keeping soldiers out of the way of harm and physical stress.

How to connect PC TV with AIRTEL set up box

Can anyone do a sony h55 review?