Success did not come easily to my mother, Louise Altson. In her childhood years and as Louise Van den Bergh, the Academy of Antwerp’s Professor Leon Brunin privately tutored her. She had a scholarship to the London Polytechnic School of Art and won awards at England’s Royal Academy. Louise met her future husband Ralph Altson while attending classes. Her background was impressive and sufficient, she thought, to start a career as a portrait painter in the United States. 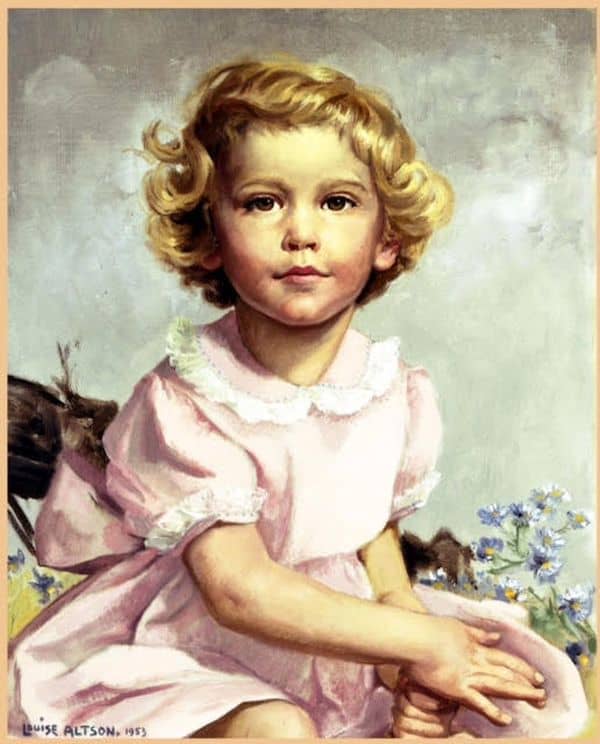 In 1939, World War II was looming in Europe, so she and her family moved to New York City. To her dismay, her first and largest career obstacle was her husband. Ralph’s father, Abbey Altson, was living with Ralph and Louise in their New York apartment and, according to Ralph, there could be only one artist (Abbey) in the household. Abbey was himself an accomplished artist with his works exhibited in Melbourne’s National Gallery.

Ralph had artistic talents but could not find work as an artist and had to redirect his drawing skills towards drafting and mechanical engineering; he worked for General Motors in nearby New Jersey. Abbey was still doing “theme-based” oil paintings and exhibited his works in New York’s Chapelier Gallery. Louise, frustrated by her husband’s “rules” sought work as a commercial artist and blossomed in that space, illustrating books, magazine covers, and even roadside billboards. It should be noted that Louise was actually able to do one commissioned portrait during this period – that of Ann Weinberg of the Guggenheim family.

Abbey Altson died in 1950 and with his death, Louise was “permitted” to focus on portraiture, the artistic space for which she was best suited. Abbey Altson had had an agent in New York City. Sometime after Abbey died, the agent came to the house to return some of Abbey’s work. He happened to see a portrait of her daughter Jean Altson and a self-portrait done by Louise. He was impressed and put the two works in the window of the Chapelier Gallery in New York City.

Louise had given some sample portraits earlier to Portraits Incorporated. Regrettably, they had been returned. Five months later, and after viewing the self portrait with infant daughter Jean in the window of the Chapelier Gallery, Portraits Incorporated contacted Louise and asked for another set of samples. Clearly, this was the big opportunity for which Louise had waited. 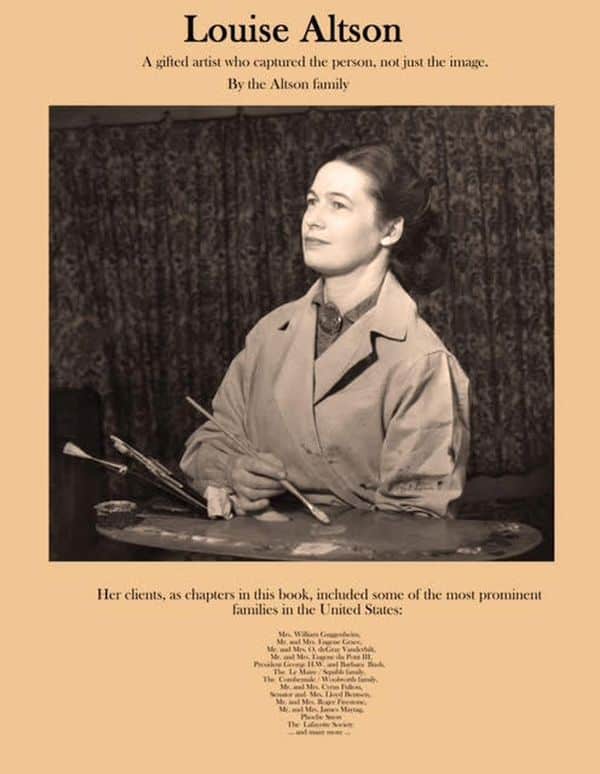 As Louise became more and more successful, Ralph became resentful both of her success and her travel time away from home. Tensions arose in the marriage. Ralph was moody and unsupportive and, in a fury, destroyed all of his own artwork.

When, in 1956, Louise was terribly ill with both hepatitis and pneumonia. The sickness continued through Christmas of 1956. While she was ill, Louise decided to leave Ralph and terminate their marriage.

After Louise recovered, she said that she found a large axe in the bedroom closet. She confronted Ralph and asked what the axe was for and his response was, “This is for anyone who did not behave.”

Louise went to a lawyer who advised her to leave home as soon as possible; she “had to protect her children.” That opportunity soon arrived in March of 1957. Ralph was on a business trip in Chicago, so Louise called the movers, told her parents, packed her belongings and left with my siblings to move in with friends in White Plains New York. 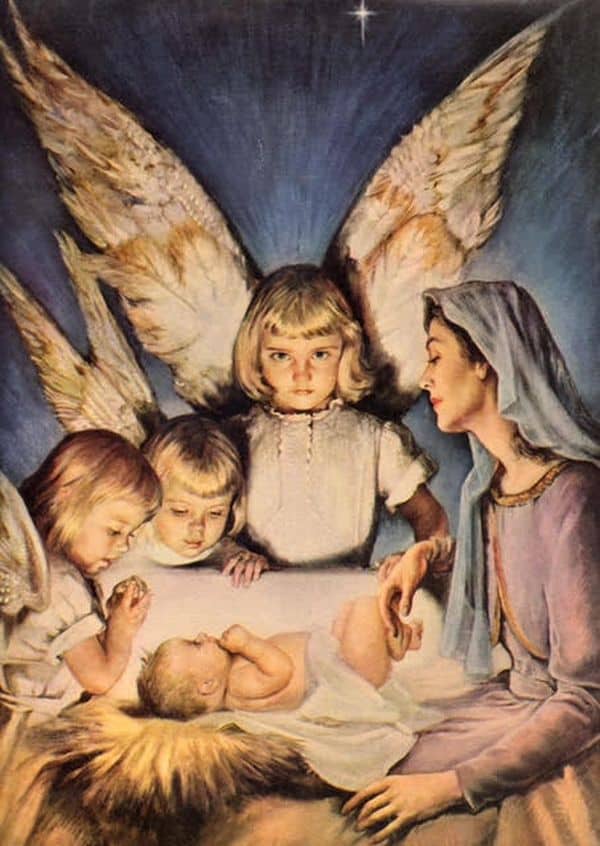 Louise died in 2010, almost reaching the age of one hundred. During her life (although there is no official count), we estimate that she did over seven hundred portraits. In at least one family, she did portraits of family members spanning three generations.

Based on prodding from a friend, I decided to write my mother’s biography. I recruited my two siblings (George and Jeannie) to help. George’s wife, Carol, was also a tremendous help.  The biography, Louise Altson – A gifted artist who captured the person, not just the image, is now available on Amazon and in selected bookstores. Thirty-three prominent families are covered as chapters, with each such chapter featuring photographs of the portraits, testimonials, and occasional anecdotal information about Louise Altson and the portrait painting process.

David Wright, an editor for the National Enquirer, was kind enough to review the biography: “The book has such an unusual format that I wondered at first if it could be sustained. But the more I read, the more fascinating I found it. The penetrating glimpses not only into the lives of Louise and her family, but also those of the prominent, household-name families who sat for her, were riveting. I loved the way characters as diverse as Ulysses Grant, Danny Kaye, Mae West, Paul McCartney, F. Scott Fitzgerald and Prince Rainier would pop up unexpectedly. Also, I enjoyed the children’s touching memories of life with Mom and Gloria. (as a long time National Enquirer reporter, the “axe in the bedroom closet” anecdote was a particular stunner!) I admired the way you described this traumatic period in your lives so honestly, while it came as a shock to discover that despite her success Louise was left nearly broke after her marriage broke up. So many tragedies run through the narrative. And how interesting to read that so many of the girls Louise painted in childhood, now up in years, still have the dresses they wore then. I was intrigued by the anecdote about the matriarch who commissioned paintings of her daughter and grandchildren – but insisted the husband not be included because divorce was so prevalent in her family. (A problem eradicated these days by Photo Shop!) The highlight of the book is undoubtedly the exchange of moving letters between Louise and the George H.W. Bush family. They give the reader a whole new insight into the presidential family. And the Cecil B. deMille correspondence is equally intriguing as it reveals an important piece of Hollywood history. All in all, the book left me thinking of Louise … what an incredible woman!”