Here is a couple in Tennessee who loved the movie Titanic so much that they decided to design their entire home theater around it. The gigantic 20 by 14 foot theater system encompasses a 120 inch television screen and a Tru Audio surround sound system that consists of speakers entrenched in the ceilings and pillars of the room. Look up and you would be amazed by the 1230 fiber optic light strands that light up an extravagant dome to give a night sky like experience.

Loved the Terminator series, then you would definitely love this home theater system inspired by the movie. Designed by Darren Mortenson, the Cyberdyne Cinema looks exactly like a sci-fest, complete with features borrowed from several horror and sci-fi movies. The theater consists of a 159 inch screen which is activated by a Da-Lite, and obscures everything else in front of it (including the rest of the equipment which is placed on glass shelves in the front). You will also be able to find memorabilia from other movies like The Lord of the Rings in here. 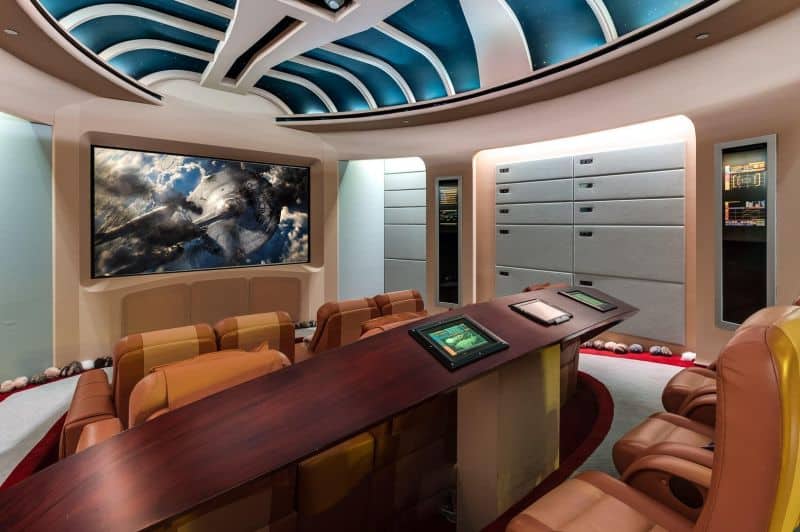 A marvelous design, this Star Trek inspired home theater comes complete with air lock doors operated by motion sensors, spectacular sound effects, a bar and ready room and a Red Alert button placed on the theater’s Creston TPMC -10 controller. The set was designed by the president of Acoustic Innovations Jay Miller after he notices that the owner loved to collect vintage video games.

The Five in One Home Theater

Designed by Aaron Vitale, this unique and extremely innovative “five in one” Home Theater occupies a space of 45 by 35 feet, and consists of a 144-inch Draper plasma screen and a high definition Sharp projector with 1080i and 720p resolution. It also includes a pair of Paradigm Signature S8 tower speakers, a pair of 15-inch Paradigm subwoofers and a single B&K AVR507 S2 audio/video receiver. And the cost of this entire set up? A staggering $100,000.

If that was not enough, here’s one home theater that costs a cool $6 million. If you wonder what it has to cost that much, then check this out. The gigantic home theater is designed by Jeremy Kipnis has so many posh components in it that you would think the rate was actually a bargain. Anyone looking at it would describe it as the “Daddy of all Home Theater Systems” out there.

We all know that a stylish home theater system would definitely make you the envy of all your neighbors and friends. So if you want your house to gain the distinguished title of “the house with the coolest home theater system in the neighborhood”, try investing some (oops, a lot of) money in a customized systems.