Geologists have uncovered evidence of when Earth was first able to support oxygen-rich atmosphere similar to what we experience today and more so, take for granted.

Research shows that it was 500 million years ago that a reversal took place, wherein from containing carbon dioxide, the atmosphere began containing oxygen, suitable for breathing. It is precisely this reversal that caused a revolutionary change. It was from this day that Earth began capable of supporting living organisms.

For the last ten years, researchers at the Ohio State University had been gathering and putting together evidence of when the Earth might have first been able to contain an oxygen-rich atmosphere. This was basically done by measuring the amounts of chemical from different rock cores around the world to chain a series of events.

The chain of events was described this way : Tectonic activity led to increased weathering, which basically pulled carbon dioxide from the air, thereby cooling the climate. As the oceans cooled down, the plankton prospered – and in turn created more oxygen through photosynthesis.

Since the reversal of that greenhouse effect, oxygen levels have been stable for the last 50 million years, having started fluctuating over the last 500 million.

The most crucial element of life support in space is a breathable atmosphere. A human in space, whether in a craft, station, or suit, must have air. As such, we have to thank nature’s way of allowing us to come into this air and for sustaining our existence. 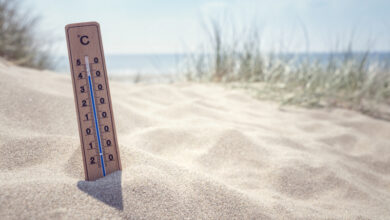 Global warming may wipe out potatoes, peanuts in next 50 years!