Technology constantly strives to make life happier, better an easier for everyone around. The latest in PDA technology has been the release of the iPads and the iPhones. Apps have been released for a host of educational purposes. Now, apps have been made to cater to those special people who are challenged with learning difficulties – dyslexia in particular. Children who suffer from dyslexia often become the ‘targets’ for the parents and teachers alike. While they need all the care and patience, they also have special learning needs. The latest apps attempt to fulfill these special needs in different ways. Here, we present five such apps that will prove to be a boon for dyslexic kids.

Like they say, “the best things in life are for free”. This app is a useful guide to learn spellings. Dyslexics have the greatest difficulty comprehending spellings of different words. And iWriteWords starts from the very beginning. It is an app with a great deal of in-built patience. It starts off by teaching from 2 letter words and gradually progresses to larger words.

This award winning app also makes the whole learning process into one filled with loads of fun. There are games in which one has to get the order of letters in a word correct. Such games help the dyslexic child by making it repeat the spellings over and over again till it gets them right. And when the spelling is fine, the child gets rewarded with cute drawings and positive, reinforcing comments.

The voice overs are well made for children. There are difficulty levels too which can be increased based on the child’s progress. Starting with easy levels in the beginning will definitely boost the child’s confidence and thereby, its performance too. It also helps the child learn rules like capitalization of the first letter of a word and so on.

This app hosts an intelligently designed phonetic dictionary. It recognizes the fact that dyslexia is more than a simple misplacement of alphabets. This is because the child never sees anything wrong in itself. The most frequent advice it receives from the teacher is to look up in the dictionary when in doubt about the spelling of any word. But what if the brain itself is wired to spell phonetically? That is where the Wordspeller comes to the rescue.

This app has all the possible phonetic spellings of a word and thus if the child spells ‘queen’ as ‘kween’, the dictionary throws up the correct word, the typed word and the necessary meanings and explanations. The only way out of dyslexia is repetitive learning and this app ensures just that.

All the kinds of errors that a dyslexic, ESL or EFL child might commit have been programmed into the dictionary itself. The common letter transposes and the misspells are all included and accounted for. Of course, you cannot expect it to have all the words, but it definitely is a tool to combat and overcome these learning disorders. 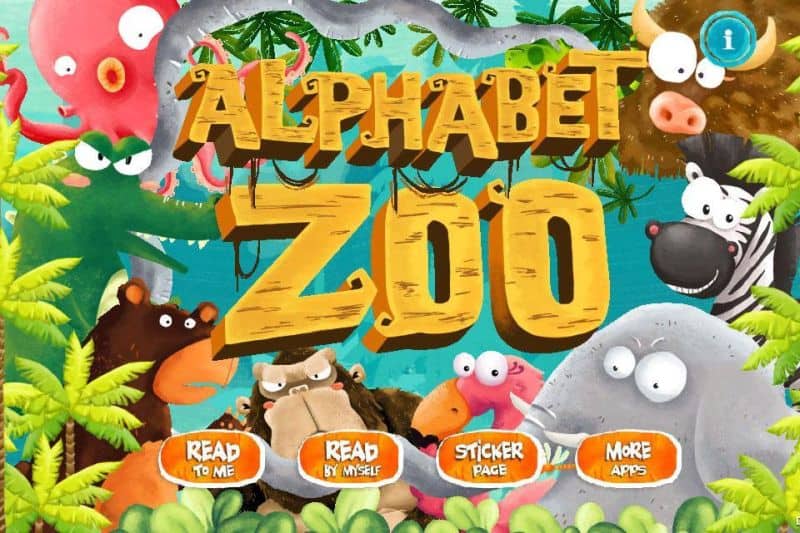 Another way to beat the hassles of trying to get the child know the right spelling is to replace the complete words with something that the child is able to identify and recognize easily. Alphabet zoo takes the child on a virtual tour of the zoo, teaching every alphabet by associating an animal with it. This can serve as a good starter program for any kid. In case the kid has dyslexia, it will definitely be less pronounced, thanks to the initial training from this app.

Apart from teaching the alphabet to the children, the app also has images and descriptions of the animals that you could read out and teach your child. It could sometimes turn out to be an educative experience even for the adults! A double tap opens up interactive tool tips. This would be a great app to begin the child’s learning experience. However, some feel that integrating animal sounds along with the app would enrich it even more.

This app comes with a host of awards and recognition under its belt. Chosen as the best app for 2011 by both parents and editors independently, it has some really innovative and nice features that make it an apt app for all children, including those with dyslexia. This is because, it works completely on sounds and letters rather than with the sight alone. Each letter is taught as a sound and this kind of phonics instruction help the child learn to spell better.

Introducing the letter names along with the letter sounds can act as an information overload during the tender formative years. Thus, the app attempts to build up the child’s confidence and spellings, slowly but surely. Once the initial training is done, the app also teaches the children to write each letter. This, apart from teaching the letters, also helps to improve the handwriting of the child. It actually inspires the child to learn on its own without parental support by making the learning process fun-filled.

This app has been specifically designed for those suffering from dyslexia and other Specific Learning Disabilities or SLDs. It aims to improve focus, concentration and the balance of the child through games that are simple yet challenging. It attempts to help the child get better in mathematical concepts, speech, co-ordination and writing.

The app has been developed by a consultant with over 15 years of experience in dealing with students who have learning difficulties. In spite of all this, there are customers who feel that the navigation and usage of the app is very confusing and a few complaints of app crashing also came in. Those may be slightly overlooked by considering the fact that this is the very first version of the app. We look forward for the improvements soon.