Advances in medicine and medical procedures are dependent on so many different separate yet interrelated areas such as science, biotechnology, pharmaceuticals, biomedical engineering, and the list goes on. All these disparate fields converge with one purpose – to improve the quality of life for people everywhere by keeping them healthy, returning them to good health, or, as is the case with IVF treatment, assisting them in realizing a dream.

In the Lap of the Gods..and the Hands of the Surgeon

Sometimes a medical procedure is developed for one purpose and then adapted for other procedures as its efficacy is determined to be superior or beneficial for those procedures. Laparoscopic surgery is one such procedure. So  what is laparoscopy? It is a procedure more commonly known by the public as keyhole surgery, minimally invasive surgery (MIS), or band aid surgery as it involves the use of tiny incisions of about half an inch. Through these incisions a laparoscope – a long, thin instrument used to perform the procedure, is inserted. Together with the laparoscope there is a camera inserted so that the surgeon can see what he is doing. The pictures from the camera are viewed on a TV monitor where everything is magnified to make the surgeon’s work easier.

So what does this have to do with IVF treatment? Well, laparoscopic surgery was developed initially for to perform procedures on organs such as the gall bladder, pancreas, and liver. It has also been used for surgeries associated with pelvic inflammatory disease, ectopic pregnancy, and endometriosis. And although laparoscopic surgery has been around for over a century, it has advanced in leaps and bounds together with advances in interrelated fields of science, engineering, and medicine. Laparoscopic surgery has been found to be of enormous potential benefit in helping to alleviate conditions that make it difficult for women to conceive. 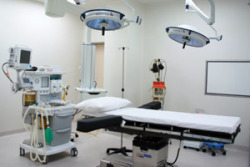 Laparoscopic Surgery as an IVF Treatment

There are numerous reasons for women being unable to conceive, each of which requires a different IVF treatment to maximize the chances of overcoming the obstacle. Some of the more common issues related to IVF that can be treated with laparoscopic surgery include:

Laparoscopic surgery has numerous benefits as the small incisions result in less shock to the body, the need for fewer stitches, less pain, less scarring, and less hemorrhaging. All these benefits result in quicker healing times and less use of pain medication. However, laparoscopic surgery requires the skills of a very talented surgeon as the procedures are performed in very confined spaces and the tools used operate in a counterintuitive manner. There is also an issue that the surgeon must overcome wit regard to depth perception.

Laparoscopic surgery confers many benefits to patients requiring its use, however the skill of te surgeon is of paramount importance.