With China about to host the 2008 Olympics, everything in the country is changing and getting revamped. But, the infamous Chinese pollution along with the dense smog are the most feared elements that threaten the 2008 Olympics. Air pollution could result in some of the Olympic events getting postponed.

This kind of pollution will be a major problem for endurance sports like cycling. For shorter duration sports, air pollution won’t influence the athlete’s performance. At least this is what the President of the International Olympics Committee(IOC) Jacques Rogge agreed:

People are beginning to come to terms with the fact it could be a major issue.All the talk has been about human rights but there has been a growing realization that Beijing has a smog problem. The bad news is that authorities have spent billions on reducing pollution, without much success, although some say otherwise. Athletes are already debating whether they will visit the country next year. The pollution index reading has reached well over 100, and some runners are seriously coughing bad.

Recently, questions were asked to some people regarding pollution. The majority of the people surveyed agreed that pollution is going down. It’s slowly clearing up. I hope that Chinese authorities along with IOC will be concentrating more on improving the air quality of Beijing. Besides the pollution problems, China also has a few other problems that threaten the ’08 Olympics. The freedom of press as well as the freedom of speech, are not quite there in the country. The human rights groups are working on improving these elements of Chinese politics. Also, with China controlling Tibet, there are protests all over the globe. Free Tibet signs and protests are being put up all over China as well as neighboring India.

Irrespective of all these problems, Olympic events are still a go in China. There was a huge party hosted at the Tienanmen square in order to celebrate the upcoming Olympics. People ignited traditional Chinese fireworks. Along with this, promises are being made and smokestack factories are being closed down in order to prepare for the Olympics. All I can say is that China should work more on the pollution issue than anything else. 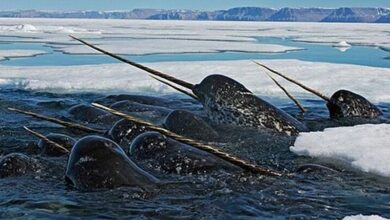 Narwhal, the spiral-tusked Arctic whale – yet another victim of global warming