When we get amazed by a galore of body arts dominating the glam world, I feel nothing can beat the ethnic body art that can be seen among few ethnic groups across the globe. It may appear weird to the hi-tech world but is a fascinating subject to observe. The Mursis  are probably the last ethnic tribes in Africa to whom it is still a social custom to wear wooden lip plates, no matter how much painful ordeal this unique body art trigger is so long as these women wear it. 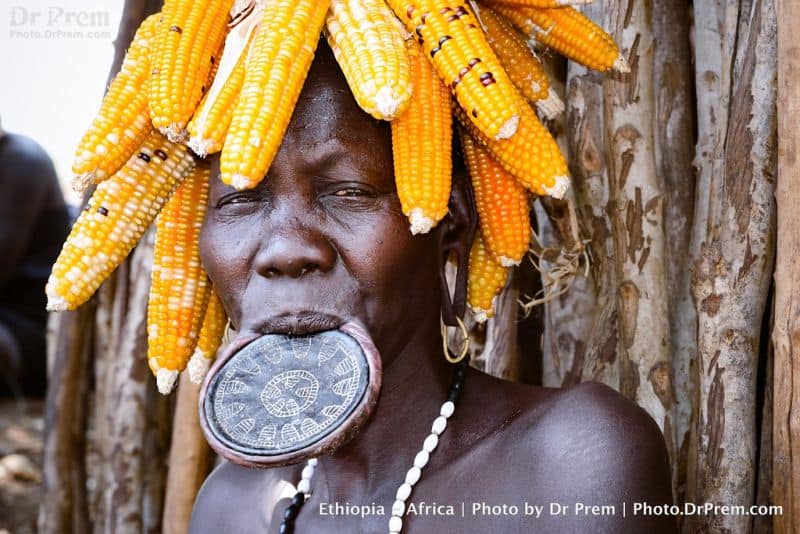 This specialized body art signifies the passage of a girl to womanhood ready to be picked up by the suitors. The upper lip is left free but it is the lower lip that bears the brunt. Mursi lip plates have a powerful social, physical and psychological impact upon the entire women folk. Those who don’t wear it for age restrictions know it well that affliction is inescapable. Someday they all would have to go through it.

Mursi lip plates are so pronounced exhibiting a disfigured lower lip that they have become a prime feature of tourist attraction. In fact, these lip plates are a unique and artificially introduced appendage that identifies Mursis as a distinct community. If you come across an Ethiopian female with heavy lip plates, you realize instantly she is none other than one belonging to the legendary Mursi tribe!

When a girl attains maturity around the age of 15, her mother or some other woman residing in her village cuts her lower lips. Mind it this is not a surgical procedure with all the disinfectants handy in an air-conditioned modern medical clinic! This is a raw wild procedure practiced by jungle people. However, the herbal plant based ointments that the Mursis apply helps heal the wound fast.

The cut is held wide apart by a wooden plug until the bleeding lesion ameliorates and the process takes around 3 months! The hole through the lips is stretched further by inserting more wooden plugs with the passage of time and until the tender flesh can take no longer. Is it a stoic display of endurance test, a matter of social esteem or a revelation of the masochistic intent of the Mursi women? Undeniably, it’s a difficult question and a baffling social norm indeed that tests a woman’s overall potential by the number of wooden sticks she can load through her pierced lips! Records reveal that 12 cm plates across diameter seem to be the maximum size of the device a Mursi woman can hold. 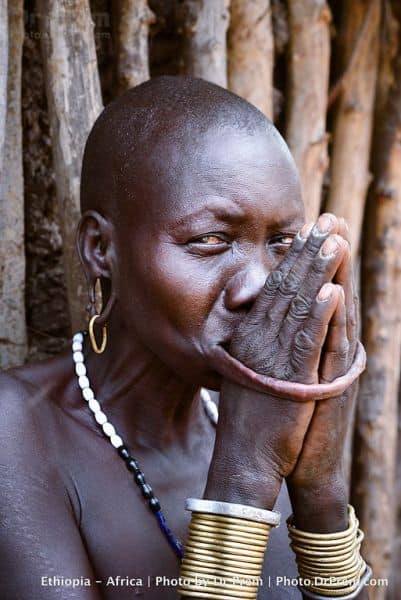 Although it is a widely practiced social norm, the Mursis being somewhat fair towards social issues have made this lip plate cult optional for the girls. But one cannot avoid social obligations though. Not mandatory but it is quite normal that a girl attaining maturity and not having a lip plate would face jeers and leers from peers with lip plates loaded.

However, there are several instances where the girl is happily married and settled with children and husband without having any incisions done through her lips. One fine morning, her inner voice goads her to get her lips pierced and loaded with plates and she gets it done. It is fine and easy and the girl is free to exercise her willpower over the lip plate issue. An element of unprejudiced gender equitability is noticed in the Mursi society when both the boys and girls get their earlobes pierced.

The size of the Mursi women’s lip plate has a theoretical backup which is linked with the size of the bridal wealth. However, this correlation has been proved a very weak justification and researchers have refuted it saying in many cases the amount of wealth paid by the groom’s family had long been decided before the bride’s lips are cut.

Another possible reason behind the lip plate cult is to save the women folk from the slave traders from the North. The debauchery of these men might put the Mursi women at the risk of being purchased and put to immoral use. Lip plates make the womenfolk unattractive. The disfigured lips are quite repulsive and the traders lose interest in Mursi women. However, Mursis themselves do not propound any theory or logic behind the practice. It is just a decorative piece of jewelry enhancing their social recognition. 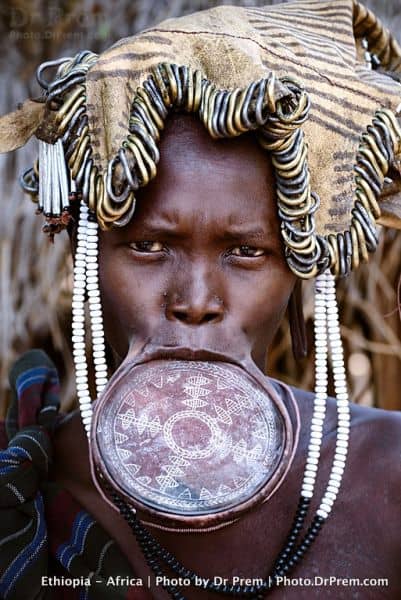 Lip plates of Mursi women can be viewed from a different angle altogether. It is an icon of adulthood, a social approval for mating and breeding potential. The cult serves as a media for social expression. It is a connecting route between the individual and the society, between the biological self and the social self.

Lip plates though not eternally agonizing certainly affect a woman’s speech pattern.  An ‘S’ sound modifies into a softer ‘th’ sound while speaking. But it doesn’t interfere with the woman’s ability to sing or effectively connect with the society. Neither lip plates hinder your articulation nor does it put any obstacle to physical performance like dancing. A similarity could be drawn between wearing lip plates by Mursi women and wearing high heeled stilettos by females in a civilized society. Both these accoutrements add a certain degree of discomfort affecting their normal gait or the rhythm.

But the females would rather choose to embrace this discomfort along with the huge social prestige that goes with it. When a Mursi woman wears a lip plate, her gait turns somewhat different loaded with pride and a high social esteem. The sound produced while she walks a bit like ‘ Dhes’, ‘Dhes’ …Dhes. This also gives her a high position in her husband’s family.

But here you have to draw a line when you speak of Mursi women’s inclination to wearing lip plates. Liking certainly cannot overrule human endurance limits. If the lip plates get too heavy and big, it definitely ceases to be an element of pride. It becomes a nightmare to be discarded at the first chance.

Lip plates and the tourists 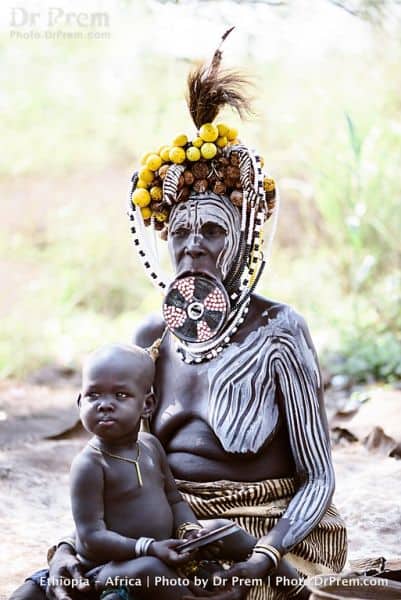 The Mursi economy rests a lot on the barter trade. At the same time, there is a mounting need for cash. This compels the Mursi females to pose before the photographer tourists. They demand 2 Ethiopian Birr for each photo shots taken. This is too cheap a deal. Shots are taken and the bizarre photos of lip plates get a place in exhibition stands perhaps. Lot of trade ensues and the Mursi women continue to wear those heavy plates.

The times are changing. The effect of globalization has hit this part of Ethiopia as well. Younger generation inclined towards education and urban life is no more willing to carry on this cult. How long would the Mursi lip plate cult survives is just a matter of time.