The Karo tribesmen live along the borders of the lower Omo River on its eastern banks. My first confrontation with the Karo tribesmen was rather dramatic. They were on a brisk walk along the bank of river Omo in a queue. I followed them keeping a distance but stumbled on the mud unable to keep balance. Hearing the thud, they came to my rescue. In a hazy vision, I had a glimpse of frightful white skeletal faces all over me and an alien vocalization. But they meant no harm. They were slightly suspicious but friendly with a heart of gold. Soon I was friends with them and stayed in their village for a few days. I explored their culture from close proximity, which was astounding and quite educative for me. 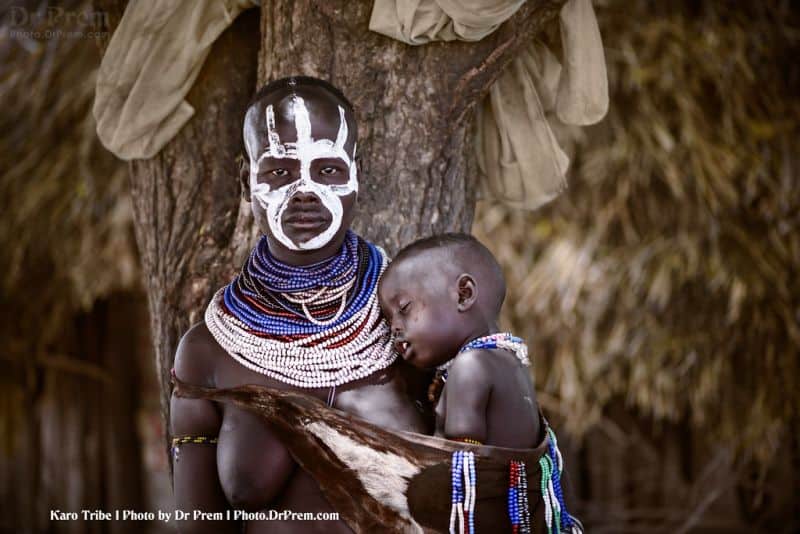 Ethiopia’s Karo people are obsessed with their facial appearance. They decorate their faces and bodies with a devout religious zeal.  For achieving this objective, they apply chalk and ochre on their faces and bodies to multiply the possibility of finding a corner in the heart of the opposite sex. The second purpose is to scare off the enemies. Both the sexes use red ochre and white chalk to generate complex designs on their faces and bodies to look more attractive to the opposite sex. The female folk paint complicated circular motifs, spiral and cross hatched designs so that they wear a more gorgeous look and stand out in the crowd clearly drawing attention of the men folk and admirers.

In Karo culture, a face mask constitutes an important part in local rituals and ceremonies. Men do this to look more handsome and valiant. Piercing of the flesh and self inflicted scars are a form of exhibits to enhance appearance. The skin scars also indicate courageous acts by men. The white chalk dust paint on the faces of the Karo tribesmen imparts a ghostly skull like menacing appearance. Their intricate head dresses and elaborate body art and scarification expresses beauty and significant social standing. They also build massive head gears and spend hours on elaborate hairstyles delivering a combined exhibit of status, courage and beauty.
Even the children belonging to the Karo tribe apply body paint while participating in religious ceremonies to get singled out as a part of the clan and this certainly is a matter of great pride for them.

Religious dogmas can at times be very cruel.  Just sometime back, 15 cursed children belonging to an unfortunate Karo mother were declared unclean or ‘Mingi’ and were fed to hungry crocs under the order of head priests or shamans. This was the brutal consequence when the mother did not express reverence towards the age old Karo traditions. The unclean children could bring bad luck to the entire village and hence this ruthless action against the family.
The reasons for being declared ‘ Mingi’ could be many such as being born illegitimate; being born as twins in which case both the children are slaughtered, or having the set of teeth in the upper jaw grow and develop faster than the lower jaw teeth set.

Since the Mingi children can bring disaster to the entire village, the village heads decide on killing them mercilessly right at the infant stage. Despite the Ethiopian government’s intervention to ban this inhuman practice of Mingi killings, the cursed children are murdered with a fanatic regularity. The Mingi children may be simply locked inside a hut and left starved until they perish. Sometimes they are left alone in the forest without food and water for the vultures to do the rest. However, superstition ruled a major part of their lives and I did not like the cult of declaring a so called socially orchestrated person ‘Mingi’ and feeding the poor creature to hungry predators. 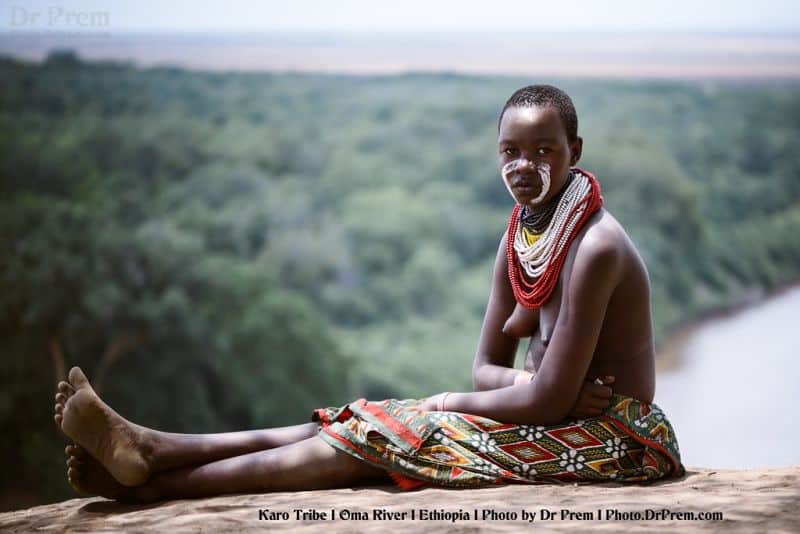 The Karo society disapproves certain acts that offends the social code of conduct and are declared a taboo. Some of the taboos regularly associated with Karo tribe include being disrespectful toward social customs and defying existence of supernatural forces, practicing same sex debauchery, and discussing sex openly in public.

For thousands of years, the Karo tribal population dwelled along the eastern banks of the river Omo in southern Ethiopia. They are closely related to the Kwegu tribesmen. Karos have a traditional practice of painting their faces and bodies and practice cultivation. They are animists and have an inclination towards scarification representing valor or killing of a foe or a dangerous animal. Karos practice polygamy. 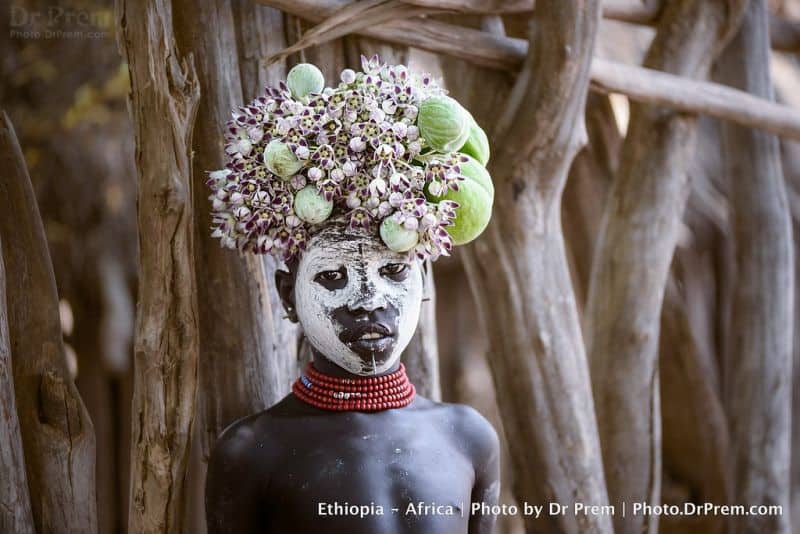 The Karo tribe is comprised of about 2000 people who thrive on agriculture and fishing. They are primarily a bit sluggish agricultural community who reside in the lower Omo river valley region of Southern Ethiopia. They communicate in Omotic language and have a rich cultural heritage.

The Karos are a highly aesthetic tribal community whose lifestyle is symbolic of significant ceremonies and a means of attraction to the opposite sex. The womenfolk are often seen lathering goat hides with animal fat to add glamour to their apparel. However, these tribesmen seem to get uncomfortable with too much clothes on. The men, women and children generally put on loin skin cloth.

Their lifestyle is often guided by their physical appearance or rather how would they like to project themselves before the eyes of the beholder. They have developed complex socio-economic and ecological practices closely adapted to the harsh and unfriendly conditions of their dwelling habitat which is semi arid and rugged. 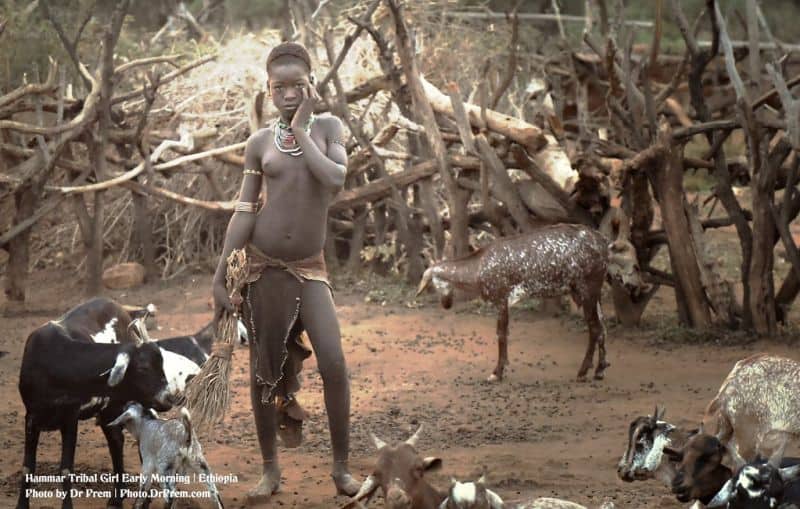 The diet of the Karo people chiefly consists of maize, shorgum and beans that are farmed locally. They also catch fish from the rivers and raise cattle and goat for milk and meat.
They consume ‘akele’, a local alcoholic beverage in large quantities during festivals. During my stay at Karo village, during some ceremony I had the opportunity to taste mugs of ‘ Akele’. It was strong and heady and went perfectly in tune with a group dance that followed.

The Karo people in general are hospitable to guests. However, men carry firearms to guard their cattle wealth against assault from cattle raiders from the rival groups. Apart from self defense, the gun is a symbol of pride as well and helps heighten their social status. They are basically generous, but during combats you meet a different Karo behind a soft and smiling facade. Just like the neighboring Hamar tribesmen, the Karos observe the ceremony of jumping over cattle standing in a row to prove the potential of the jumper to marry.  Karos cohabit peacefully with the neighboring tribes but could turn vicious and break into a gory fight with the Mursis over ownership rights to cattle wealth. 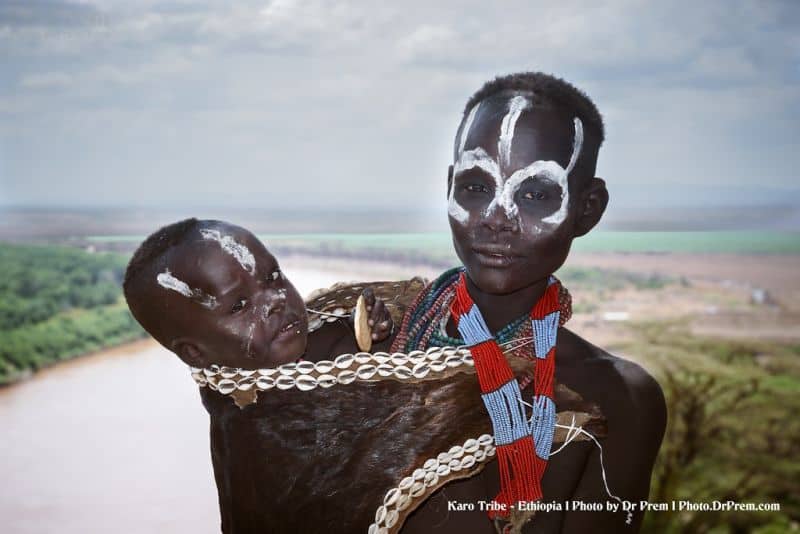 On top of constant threat faced from the cattle usurping rival tribesmen, the survival of this tribe also faces a huge challenge from the boom of construction and commercialization – a product of the modern competitive world which means business and nothing else.

The construction of the hydroelectric dam Gibe III is being carried out across the Omo River.
This project is a clear threat to the Karos and the other Omo river valley tribes. They are practically forced out of their habitat which has resulted into an extensive loss of livelihood.
The Karos depend upon the river’s annual flooding and go for flood retreat farming using the rich silt deposits left after the flood waters draw back. But the Gibe III dam across the river would interfere with the rivers flooding cycle and would disrupt the environment and the Karo River based agro economy. 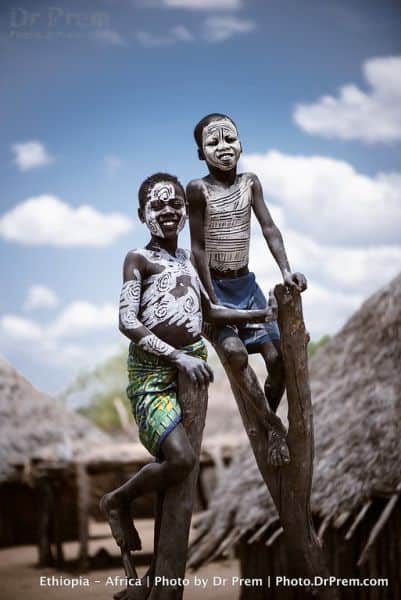 Similarly, the land grab programs initiated to lease out large acres of fertile soil to Korean, Indian, Malaysian and Italian companies for plantation of biofuels and cash crops would indeed expel the Karos out of their agro based means of earning.