I often write about the abysmal human rights record in Tunisia and the awful ruling elite, but the nation is not defined by them. Instead it is defined by the warm and welcoming, and humble, people and their excellent cuisine. Along with the incredible and, believe me, unbeatable ruins and breathtaking beaches. This part of Tunisia is often not entirely appreciated and so I’ll offer a glimpse of it and showcase just how diverse and amazing this small country is.

First, I will start with the ruins. Much of Tunisian history is defined by the Phoenician city of Carthage and the rival or Rome it posed along with Hannibal’s memorable crossing of the Alps during the Punic Wars. But, alas, much of the ruins today is not Phoenician but Roman ruins. After Rome won the war, it destroyed Carthage et al and rebuilt along Roman lines (very similar to Phoenician). That’s most of what you’ll find in Tunisia. But off in the north east of the country, a Phoenician city did survive and its ruins stand today as the only remaining Phoenician city in the world and as such a designated UNESCO World Heritage Site: KERKOUANE

Kerkouane was founded in the 6th century BCE, and was destroyed during the Roman revenge campaign against Carthage after the wars in 146 BCE. But Kerkouane faced much milder treatment, nor was it ever redone into a Roman town.

Considering its excellent location, next to the sea (top photo) right here on the tip of Africa, about as close as you can get to Europe, it is mystery why the Romans never used it to build their own town.

Kerkouane has surprised archaeologists by its almost complete lack of grand public buildings. The only exception is a sanctuary with some columns preserved (second photo). Still archaeologists work on the Kerkouane site, but the best parts should be discovered by now.
The economy of Kerkouane was the the manufacture of purple dye, one of the most valued colours and used in many European countries only by royals. Shellfish known as murex were caught along the coast and placed in pits in the ground (lowest photo) to rot.

Of course, Phoenician ruins are no match for those of Rome. And the country is home to the second largest Colosseum and one in better condition that the one in Rome. DJEM:

The Colosseum is amazing, but there is more which is just as impressive. DOUGGA:

The beautiful theatre at Dougga dates back to 168 CE, and was donated to the city by one of its wealthiest families. Its condition is so good that it used for the concerts at the Dougga Festival in summer.

The theatre has 19 tiers, and space for 3500 spectators. It was built up the hill, which facilitated the construction much.

All of this, however, does not equal the ruins of Carthage. The amalgam of the ruins, the mountains and the Mediterranean are too much for words:

Anyway enough ruins. Tunisia is also home to the best national park in all of north Africa: ICHKEUL NATIONAL PARK.

In the port city of Binzert, there are decaying French ships idle in the water along the coast. France refused to initially leave Binzert after Tunisia achieved its independence and only left after riots. French left some ship behind to just sit and decay, probably out of spite. If so, the joke’s on them since these ships are cool to look at:

EL HAOUARIA:
(By the way, when you’re there do not miss the Roman caves):

Now the southern city of Tozeur with its second largest salt lake in the world:

And, finally, there is Tataouine where George Lucas placed Luke Skywalkers’ home and even named it after the town:

And there’s much, much more but you’ll have to discover that on your own!

Enormous homemade slip’ n slide-Would you like to take a ride? 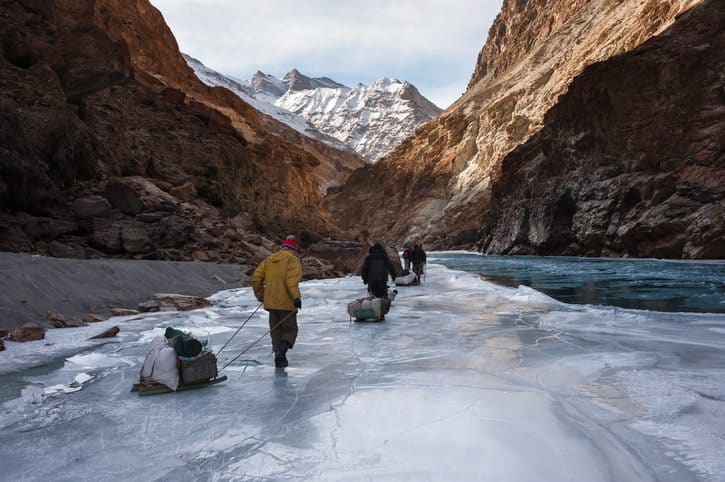 The “Frozen Dessert” Festival of Ladakh

The romance of mountain railway