If you are a history buff, you will certainly love to explore the most popular heritage places around the world. We have created a list of seven best such sites in this article that would simply leave you spell-bound. Some of them might be of cultural importance while others boast of having natural significance. So, just check them out and get prepared for your next trip.

Planning to visit Paris in France? You should never miss out this wonderful place. Notre-Dame de Paris or Notre-Dame Cathedral comes at the top of the list of the most amazing heritage sites in the world. This momentous ‘Roman Rite Catholic Marian Cathedral’ has shaken the concept of ‘boring old church’ and come up with pure elegance as well as absolute significance. Being a fascinating cathedral, Notre-Dame is exemplified by beautiful French-gothic style and structural designs, sculptures with awesome natural looks, attractive stained glass windows, and so on. Though some parts of the construction were damaged during the French rebellion, you can still get its historical essence and make your visit to the ‘City of Light’ memorable.

Love to explore old royal palaces? You would definitely love the Alhambra then. Located in the province of Granada in Spain, the Alhambra is basically an old fortress turned into a grand palace. According to history, it was the abode of Moorish kings which has now been converted into a large outdoor museum exhibiting the affluence of Islamic architecture. Once you enter the royal complex, you come across a number of graceful edifices like extravagant uptown quarters, official assembly rooms, cabana, mosque, and so forth. There are also quite a few quads bordered by large monuments, fountains and doorways. What’s more, the position of the citadel complex is quite interesting. You can enjoy the pictorial view of the banks of the river Darro from the palace sited atop a rocky hill.

After France and Spain, let us have a look at our very own U.S. There is the Everglades National Park, the biggest subtropical wasteland in the country that will make you amazed by its vastness, greenery and legacy. It is considered as one of the most remarkable heritage sites in the world. The aim of developing this National Park in the state of Florida was to provide the utmost protection to the delicate ecosystem. The present park shields the twenty percent of the southern region of the actual marshland Everglades. Wonderful wildlife is another great attraction of this site. Apart from verdant greenery, this park is also full of a huge variety of flora and fauna including crocodiles as well as alligators.

The historic centre of the city of Saint Petersburg should also be included in the list of best heritage places on the earth. If you want to get a taste of the historical as well as cultural past of the city, you have to come to this unique place during your visit to Russia. The inland waterways moving smoothly and gracefully through the center, the magnificent bridges bowing over the monuments, twisted spires running through the sky, each and every part of the site will create a magic in your mind. Some of the notable edifices found at the historic centre of St. Petersburg are the Marble Palace, the Winter Palace, the Admiralty, the Hermitage, etc.

It is not only one of the most incredible heritage sites, but also one of the Seven Wonders of the Ancient World. The site, which was basically a primeval cemetery, is positioned at the outskirt of Cairo and comprises quite a few well-known pyramids including the Great Sphinx, the Pyramid of Khufu, the Pyramid of Menkaure, the Pyramid of Khafre, and the rest. Situated in Giza, the third biggest town in Egypt, these huge structures are truly awe-inspiring. Make sure that you visit these splendid structures used as burial places for pharaohs during your visit to Egypt. Otherwise, you trip will remain incomplete. 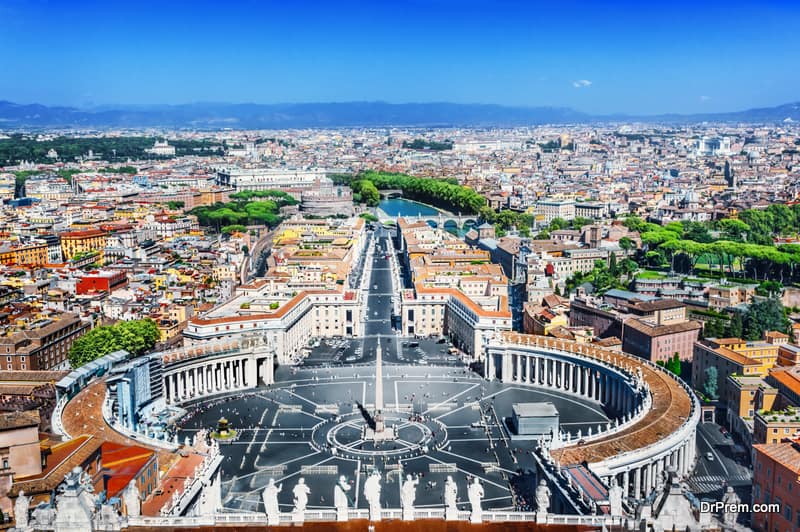 Well, you might have heard that Vatican City is a beautiful as well as religious Italian city. But do you know that it is considered among world’s top heritage sites too? If you explore the landlocked, self-contained sovereign city-state, you will get to know what are actually there inside the walls and why those are called heritage. The Apostolic Palace, the residence of the Pope, the Sistine Chapel, thousands of well-equipped other rooms, and the awesome ceiling frescos created by the great artist Michelangelo, etc. are some most stunning features of the place.

Rapa Nui, originally named as the Easter Island, is a Polynesian isle. Situated in the south-east section of the Pacific Ocean, this huge volcanic island is full of weird figures. There are a total of 887 such figures, which are called ‘Maoi’ by the local people. Experts say that earlier habitants of the Easter Island developed these 60-feet long and 100-ton structures to represent their ancestors. It is also one of the most astounding heritage places in the world.