With the rapid industrialization as well as commercialization, more and more high-rises are being constructed around the world. It is making the cityscapes marvelous by developing spectacular skylines. Here are 8 most popular cities having stunning skylines across the globe:

Frankfurt (Frankfurt am Main) is one of the largest cities in Germany. It boasts of having an amazing skyline as there are a number of skyscrapers throughout the city. 337.5-meter high Europaturm, 208-meter high Westendstrasse 1, 259-meter high Commerzbank Tower, 256.5-meter high Messeturm, 200-meter high Main Tower, etc. are some of the tallest buildings in the city. Among all these, travelers can only visit the Main Tower. Relishing authentic German dishes at the 187-meter high restaurant in this skyscraper is a true delight. It also offers the best view of the city to the visitors. Frankfurt’s 159-meter high Westend Gate hosts the tallest hotel of the country. You can spend a couple of days at the Marriott Hotel while visiting the city and make your trip a memorable one.

This beautiful Australian capital is considered as the second best city in the world to have a spectacular skyline. There are several high-rises throughout Sydney like 243-meter high Citigroup Centre, 240-meter high Deutsche Bank Place, 241-meter high Chifley Tower, and so on. But nothing can be more appealing than having a look at the city from the 309-meter high Sydney Tower. If you want to enjoy the most excellent view of the site, you have to reach the uncovered observation platform located at the height of 268 meter on the tower. On the other hand, those who dream of an exclusive stay at the highest hotel in the city have to choose the 131-meter high Hilton Sydney. The highly popular Glass Brasserie of the hotel offers an incredible view of the momentous Queen Victoria Building through its polished glass wall of 13 meters.

Seoul is the capital city of South Korea. Being the largest metropolitan area of the country, it houses a large number of skyscrapers and these create a stunning skyline above it. The Tower G of the Tower Palace Three of Seoul is 264 meters high while the Tower A of the Mok-dong Hyperion is 256 meters. Some other high-rises include 228-meter high Trade Tower, 249-meter high KLI 63 Building, and so forth. However, none of these buildings will give you the best view of the city. Just visit the 63 Building and go to the Walking on the Cloud bar at the 59th floor. From this place, you can clearly enjoy the panoramic view of the celebrated Han River of the city. You can also choose to spend a couple of days at one of the two tallest hotels – ‘Conard Seoul’ and ‘Sheraton D Cube City Hotel’ – located at the heart of the city.

The coastal city Seattle should also be included in this list of places on the earth having admirable skylines. The Columbia Center, which is around 286 meters high, is the tallest structure in the city. Apart from it, some other high-rises found in Seattle are 184-meter high Space Needle, 235-meter high 1201 Third Avenue, 220-meter high Seattle Municipal Tower, 226-meter high Two Union Square, etc. The observation deck present on the 73rd floor of the Columbia Center offers a breathtaking view of the entire city of Seattle in Washington. If you want to make the most of your stay at the city, the biggest hotel named Westin Seattle would be the best choice for you. 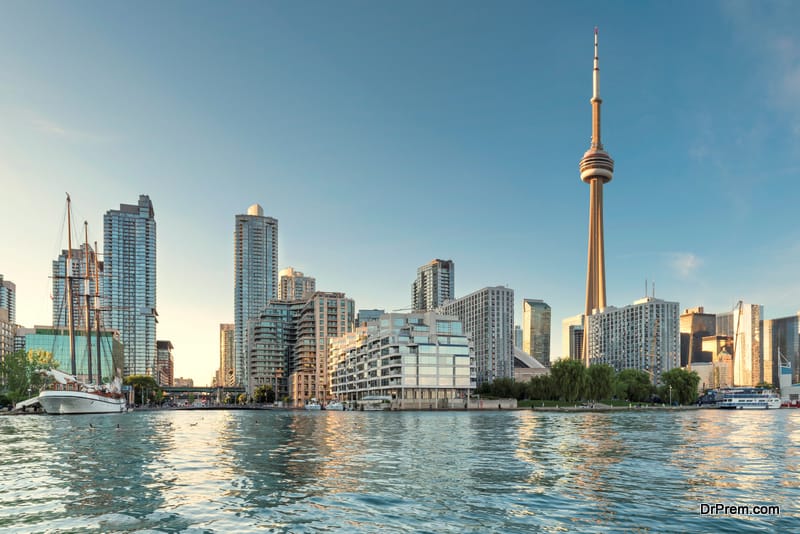 The ‘Clown Town’ Toronto is the biggest city in Canada, and known to have one of the most appealing skylines around the world. The much-talked CN Tower present in the city is as high as 553 meters. According to the American Society of Civil Engineers, this amazing structure is one of the contemporary ‘Seven Wonders of the World’. There are a total of two observation platform in the tower. Visitors can also relish continental foods at the 351-meter high revolving restaurant of the tower. 298-meter high First Canadian Place, 261-meter high TD Canada Trust tower, 281-meter long Trump international Hotel & Tower, etc. are some other famous skyscrapers in Toronto.

Kuala Lumpur, the populous Federal Capital of Malaysia, is considered as one of the most advanced places in the world. There are numerous high-rises throughout the city, such as 421-meter high Kuala Lumpur Tower, 244-meter high Menara Maybank, 310-meter high Menara Telekom, etc., which make its skyline magnificent. The Petronas Towers, which is almost 453 meters in height, is the tallest building of Kuala Lumpur and its viewing deck offers an awe-inspiring outlook of the entire city.

With so many skyscrapers present, Tokyo should also be regarded as one of those cities featuring awesome skylines. The Tokyo Skytree, a 634-meter long construction, is the tallest building of the city. There are a total of four observation platform in the high-rise. 240-meter high NTT Docomo Yoyogi Building, 248-meter high Midtown Tower, 333-meter high Tokyo Tower, etc. are some other remarkable structures present there.