Jainism is traditionally known as jaina dharma which is an Indian religion. It prescribes a way of non violence and equality between all living beings. The word Jainism is taken from the Sanskrit verb Jin which means “to conquer”. These people have a highest literacy than any religion in india. Manuscript libraries are the oldest in the country.

Jain temple is the place of worship for jains. Jain temple across india are called by the word DERASAR. These temples are designed in different models with a great architecture. Temples in north india are different from south india. As the same it differs for west india also. Jain temples have many marble pillars which are carved nicely with demi god posture. In front of every jain temple there will be a pillar called as the Manastambha. Let’s see some of the jain temples how they have constructed in india.

Palitana is the city located in Bhavnagar district, Gujarat, india. Palitana is famous for jain temples which are cited on Mount Shatrunjaya. This city is called with a nickname as “City of Temples”. It is named as holiest of all piligrim places by the jain community.  Jain people believe that visiting this place is essential atleast once in a life time to achieve salvation. There are almost 863 marble carved temples on the hills. These are aged over a period of 900 years from the 11th century onwards. This is one of the famous jain temples in india.

Gomateshwara stands on a hill in the city of shravanabelagola which is located at south east of Channarayapatna of Hassan district, Karnataka. It is one of the important pilgrimage destinations for jains. Gomateshwara statue is the stunning statue in this place. It is almost 17.38 meters high. It is a monolithic stone statue which is regarded as largest statue in the world. The statue of gomateshwara is bathed with milk, ghee, saffron, curd and gold coins once in three years on the event known as Mahamastakabhisheka. The Gommateshwara image has large ears with curly hair in ringlets. Eyes are open as it is viewing the world with detachment. Shoulders of the image look broad with his arms stretch straight down.

It is cited directly across the red fort in the historical chandini chowk area in delhi. It is called as Shri digambar jain lal mandir which is oldest and popularly known as jain temple in delhi. It looks impressive with red sandstone temples. The temple premises are the best house for the medical center for birds. With the inspiration from the message “Live and let live” given by mahavir they are giving a free treatment. It is the best bird’s charity hospital. There is bookstore complex where you can find lot of varieties of literatures on Jainism is available.

Ranakpur is the village near sadri town in pali district of rajasthan. This is the famous jain temple built by Seth dharna sah with the aid from rana kumbha in 15th century. This temple is dedicated to lord adinatha. Ranakpur temples are superb and well structured architecture. They are several temples lied. Among them the chaumukha temple is the most important temple. There are four ways to enter into the chambers of the temple. These will take you to the main hall where the image of adinath is positioned.

Dilwara templese is famous piligrimage site for the jain in the world. It is located 2 ½ kilometers from Mount Abu which is the rajasthans only hill station. The temples are well structured with marbles and architecture. These reflect the jain values like frugality and honesty. A marble stone carving grabs the attention. Though the temple looks simple from outside but the interior showcases are really extraordinary which shows the art of the human craft skills. The temple is surrounded by the green hills gives more pleasant feeling.

Khajuraho village is the one of the popular tourist and pilgrim’s destination. It is located in Chhatarpur district of Madhya Pradesh. It is about 320 kilometers southeast of new delhi. You can find a plenty of jain and hindu temples in this village. We can find number of jain temples which are enclosed within a compound wall. It is constructed in the 20th century with the ghantai temple. The temples consist of an inscription of 954 AD mentioning in that as to protect the gardens and future generations to safeguard the temple. You can also find the old magic square. The temples are made up of sandstone. The stones were put together with tenon and mortise. This type of construction needs very precise joints.

Sonagiri is the small town which is about 60km from Gwalior. It consists of jain temples built in 9th and 10th century on little hills. This place is popular for ascetic saints and devotees for practicing the self discipline and to gain Nirvana. Nearly 5 ½ crores of ascetic saints gained moksha from sonagiri temples only. Total 77 beautiful jain temples on hills and 26 temples are in village. The lord chandraprabhu is principal diety in all this temples.

Travel dos and don’ts for couples traveling first time together: 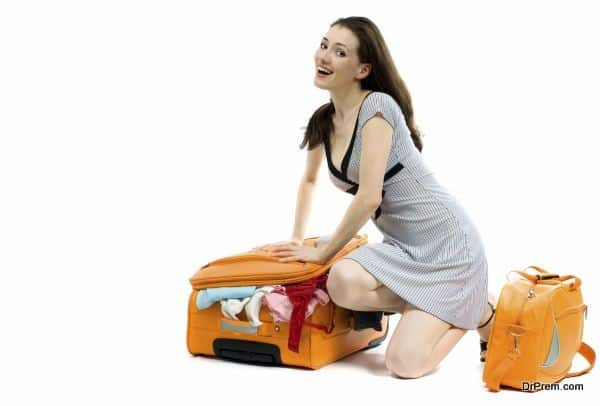 Work with your packing to travel light

Jetting off for the summer? Here’s where to go