Nature is full of wonders and the natural holes are an example of the mysterious workings of nature. Even science cannot satisfactorily explain all natural phenomenons around us. Human activities have also created huge holes around the world which have become tourist attractions due to their enormity. Humans have dug big holes mainly for extracting minerals from mantel and deeper layers of the earth. Both the manmade and natural holes look spectacular especially due to their oddness. They are not in harmony with their surroundings but still manage to attract visitors. In this article you will get acquainted with the biggest and most stunning natural and manmade holes that you can visit sometime in the future.

The Great Blue Hole is a unique creation of nature. It is a sink hole that has been created somehow in the sea. To reach there you will have to move off the coast of Belize and venture into the sea. It has been esteemed as a natural miracle for ages. The Great Blue Hole is about 125 meters deep and its diameter is 300 meter. Ships can pass above the hole because it is filled with blue sea water. This huge sink hole was created around 65,000 thousand years ago when the sea levels got changed. Quaternary glaciations are held responsible for the formation of this hole during the transformation of sea levels.

The Diavik Mine is a manmade hole that never ceases to attract tourists. Not only the gigantic size and proportion of the hole but the reason behind digging it also makes it popular. In the year 2003 this hole was dug in the north western region of Canada for extracting diamonds. It is a huge diamond mine that is capable of producing 1,600 kg or 8 million carats of diamonds per annum. A diamond mine this big is bound to be an important part of the economical structure of the region. There are 700 miners who work here at present and depend on it for their livelihoods. It is 240 meters deep.

This hole is actually a very huge drain. You need to travel to north California and go straight to the Lake Berryessa for watching it spill away the excess water of the dam. This is also a manmade hole which has been created to stop water overflow and better usage of water resources. In the year 1993 the Monticello Dam Power-plant was built. The gorge drinks up the water at a speed of 48,800 cubic feet in every second. A huge concrete pipe releases the water about 700 feet away from the hole.

The Guatemala City Sinkhole can leave any unaware passer by gaping at it. It is truly enormous and it is situated in a moderately populated area. It came into being in the year 2007. At first people thought that the tropical storm named Agatha had caused it but later geological researchers proved that it was caused by the sudden burst of an underground storm drain or sewage pipe. The upper crust of Guatemala City was made of the pumice fill from volcanic eruptions. It could not sustain the burst of the storm drain pipe and collapsed causing the death of two people and injuring thousands of people. This hole is 100 meters deep.

The Mirny Diamond Mine, Russia:

In the Eastern Siberia there is a huge diamond mine which is known as the Mir Diamond mine or the Mirny Diamond Mine. It is located in Mirny of Russia. It has been recognized as the second biggest manmade excavation hole on the earth’s surface. It has been measured that this mine is 525 meters deep. It is also very wide as it has been found that its diameter is nothing less than 1200 meters. At present no excavation work is performed at this diamond mine and it was first discovered some 50 years back by a Russian geologist named Yuri Khabardin.

Often considered the deepest hole made by humans, the Kimberley Diamond Mine is located near the point where the Vaal and Orange rivers have met. You have to travel to the Northern Cape in South Africa to see this gigantic manmade hole. The original hole was no more than 240 meters deep but for excavating diamonds a 1097 meter deep underground area has been emptied. This mine is now closed.

At Darvaza in Turkmenistan a huge deposit of natural gas was discovered by some geologists in the year 1971. The amount of natural gas stored here was enormous but a lot of poisonous gaseous substances were mixed with it. The geologists decided to set a fire so that the poisonous gases get burnt and destroyed. They did this for saving the local inhabitants. The fire is still burning and no one has been able to predict how long it will continue to burn. 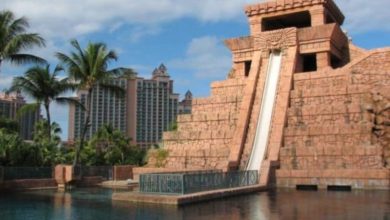 Craziest water slides around the world for that ultimate fun

Top 5 hidden islands that you should visit

Hair-raising places across the world