People now-a-days are tired of eating traditional food. The species Homo sapiens being capable of eating almost every eatable in world, does not take aback trying new dishes. Say it is vegetarian or non-vegetarian food, human shows interest in trying every new thing available around. If you find some unusual food around, you must let your taste buds try it once. Many of the eateries around the world have come up with a wide range of innovative cuisines to give you an experience of the bizarre food. It may surprise you or shock you but it would be an exciting experience once in a lifetime.

Let us discuss few of the unusual and bizarre cuisines available around the globe.

Many of us may not accept but it is a fact that the goat head is considered to be a delicacy in South Africa. Many of the popular restaurants have goat head as the most demanded cuisine in their menu. The goat head is made eatable by cooking it with garlic, tomatoes, ginger and chillies. The fried head is served as a whole along with the ears, tongue and brain. If you are selected to be a privileged customer, you may find the head with its eyes staring at you.

The eyeballs of many animals are considered to be eatable in many countries. However, the tuna eyeballs are very popular in Japan. These are easily available in almost every supermarket. Tuna eyeball is said to be similar to squids in taste. These are also very cheap and affordable by all.

Yak’s penis is only available in Guoliz huang Restaurant in Beijing. There is a popular belief behind having Yak’s penis as a cuisine. People in Beijing believe that Yak’s penis helps in restoring virility in older men and making the skin of the women shinier. This dish has made the restaurant popular worldwide. The organ is presented in the shape of stars.

This dish might be the most bizarre cuisine available ever. This dish is prepared from cheese made of sheep milk. The horrible thing is it has live insect larvae in it. The cheese is consumed by the maggots and passes through their systems. These insect larvae can jump up to a height of 15 centimetres. You might need to avail glasses to taste this food. This is usually consumed in Sardinia, Italy.

Though sea foods consumed all over the world are usually dead, Sannakji is the only sea food dish for which this fact does not apply. This dish is pretty popular in Korea. This dish comprises nakji octopus cut into pieces and served alive. The meat of octopus is season with sesame oil. The ideal way to have this is to chew it nicely before swallowing. This dish should be eaten with care as the suction cups are alive on the octopus’ arms and may result in a choking hazard.This dish is usually found served in almost every restaurant in Seoul.

Frog legs are believed to have medical benefits for many ailments and are consumed all over the world. However, the bull frog legs are consumed as a dish mostly in French cuisine. Eating the whole bull frog is of course an innovative dish to consume. The complete bull frog is eaten in Namibia. The giant bull frogs have toxic skins and these are considered to be dangerous to be eaten. However, people in Namibia take a good care of these things while preparing the frog to make it consumption worthy. The toxin levels in bull frog usually mellow out after the rainy season. So they are harvested after this season gets over. 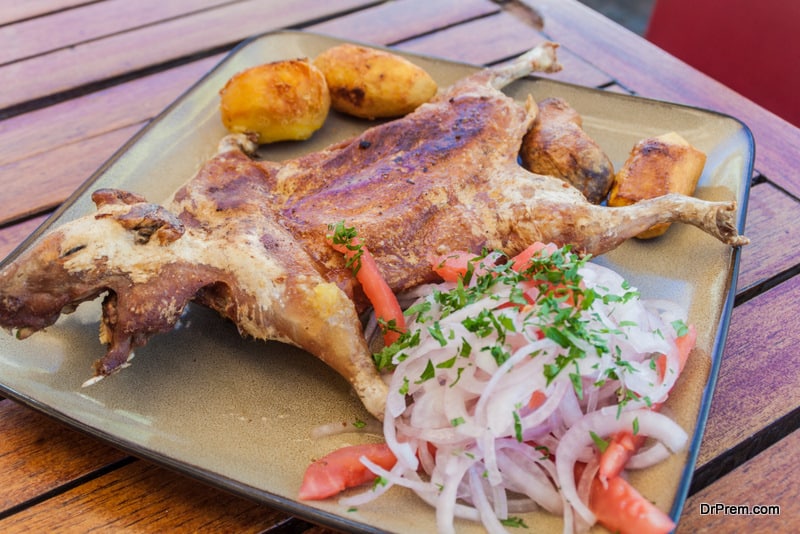 Fried spiders are very popular in Skuon, Cambodia. These spiders are of special breed, which are found in underground holes. They are cooked with oil until their legs become completely stiff and served with garlic and salt. The fried spiders are crunchy and taste similar to cod and chicken.