To promote religious tourism, many countries have come forward pooling their resources with honest efforts and widespread media coverage drawing the world’s attention towards its wealth of sacred monuments enriched with traditional and cultural values. It has successfully showcased the religious sites as prominent spiritual centers arousing interest among tourists. Here is an enlistment of few nations exercising an all out effort to market religious tourism:

This age old cathedral, probably the oldest in America, is situated in a square bubbling with activities. Every effort has been initiated by the Catholic spiritual heads to spread the religious implication of this cathedral across the globe. They are putting untiring efforts to bring this site under limelight promoting it as a primary place with a religious history of more than 500 years. Acting in consortium with the tourism department, the Archdiocese has drawn up a sacred itinerary guiding tourists touching 16 churches, monasteries, hospitals and convents. These landmarks are basically the groundwork that has paved the progress of this nation and made it become the first city in the new world. An amazing museum features the region’s history and tradition, and there is an all round focus to ensure that this country receives worldwide attention in religious circles.

Jordan has launched a promotional drive targeting countries like Indonesia and Malaysia. The campaign is concentrated on drawing Muslim tourists in particular propagating the notion that Jordan is an important religious portal for sacred Muslim monuments. A number of promotional drives have been adopted specially offering annual Haj pilgrimage packages extending their tour itinerary afterwards to Jordan and Palestine which bear pronounced Islamic heritage.

Greece has taken a commendable promotional drive to popularize religious tourism. It has planned delegating its religious tourism professionals to Shanghai in China. The initiative has been taken by the Synod office of the Grecian church responsible for promoting sacred trips. The church has launched an effective policy to draw tourists from abroad to its monasteries and sacred monuments. A set of procedures has been laid and deals signed between the church and the ministry of tourism in order to upgrade religious tourism in Greece.

Italy has launched a massive promotional hype for making religious tourism popular worldwide. The annual visit of tourists to Italian sacred monuments and shrines has been rising steadily over the years, a clear indication of the nation’s result oriented promotional drives. The cathedrals, monasteries and spiritual sanctuaries are well maintained, and utmost care is put on keeping these ancient structures neat and gleaming by the use of the latest technological knowhow. Side by side, the ancient heritage which reverberates with an awe inspiring and imposing sacred theme is kept alive making Italy a seat of devout Christian faith. The famous monuments of the Abbey of St Michael, the sanctuary of Madonna Della Corona, the Quadrilateral of faith close to Turin are some of the glowing examples of emphasis laid by Italy’s tourism promotion council in marketing religious tourism making this country an ultimate target for those in quest of spiritual bliss of Roman Catholic faith.

A majority of Thai people follow Theravada Buddhism and they have great respect for Buddhism which is rather looked upon as a philosophy, a way of life. The monks have a revered position in society, and the Thai people like to discuss with great enthusiasm the amazing character of their religion with the outsiders. Their religion mingled with Hinduism is considered very tolerant that traces its way back in history at some point of time. The Thai pagodas and architecture have religious themes engraved, and depictions from the life of Lord Buddha are simply marvelous. The Thai tourism board is exactly out on a promotional drive to draw to this wonderful aspect of Thai religion. The awesome cuisine is an added bonus to lure the tourists and marketed to enhance their count of annual visits. 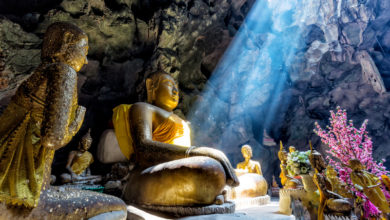